This came to me via F*c*b**k, and I thought it worth passing on here. 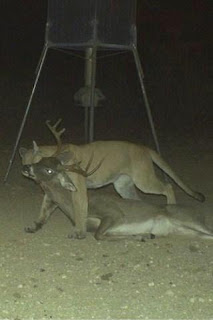 This was taken by a trail cam near Jacksonville, Texas.  Some of the comments seemed strange, to me, as if people were shocked to see such a thing.  Jacksonville is over in eastern Texas, quite far from here, but as I may have told some of you before, cougars used to live around here, too.  Some old-timer coyote hunters told me tales of their hounds trailing a "lion," as they called them, and I saw one myself in broad daylight when I was six years old.  Scared the cr*p out of me, too.

Back then the school bus didn't go down our road, and we lived about two miles from the highway.  So every day the bus would drop me off and I'd walk the two miles home.  At that time, there were no other families with school-age kids living back there, and my sister was still only two years old, so I walked it alone every day.  My grandmother lived with us then to baby-sit my sister, and she didn't drive so she didn't have a car.  I had gone about a mile down the road, well out of sight of the highway, when I just happened to look behind me and saw one saunter across the road about 50 yards away.  I knew what it was, since I'd seen pictures of them in books and movies, and like I said, I was a scared little six-year-old kid.  I knew there was an elevated deer blind near the road not much farther along, and I considered maybe climbing into it and trying to hide until I heard a car coming, because I knew my dad would be coming home from work within an hour or so.  I kept watching carefully for any signs of its approach, staying in the middle of the road where I'd have plenty of open space around me.  By the time I got to the deer blind, I hadn't seen it again and I knew an old retired couple lived a little farther down the road, so I kept going until I got to their house.  I knocked on their door and told them what I'd seen and that I was afraid to walk all the way home, and the old gentlemen gave me a ride the rest of the way.

That night, I told my dad what I'd seen.  He asked me to describe it, and then he said, "Well, I've heard them screaming at night sometimes, but I didn't ever tell you because I didn't want to scare you."

That was the only time I ever saw one.
Posted by AlanDP at 8:23 PM