Your life or your lupins, m'lord

More bluebonnets that aren't bluebonnets today.  I had a mandatory OT day today, and found these up in the Great Northwest.  First picture:  purple.  They didn't come out all that well because I was just using my phone camera, but they are light purple. 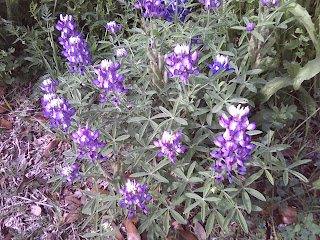 This next picture are some regular bluebonnets, from the same yard, for comparison. 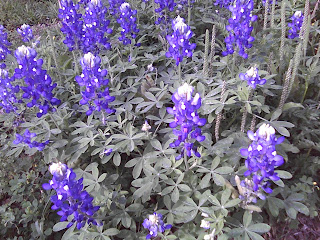 And then another shot of the purple ones. 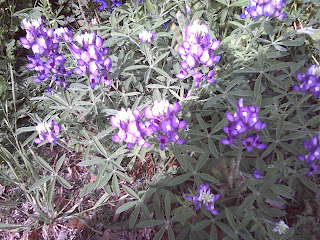 There were also some red ones mixed in. 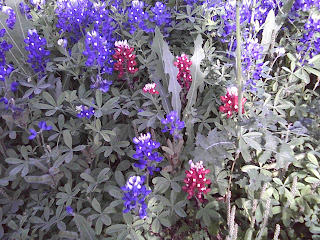 And these were directly across the street from all the previous.  This didn't come out well, either, but I would describe this color as "dry corncob." 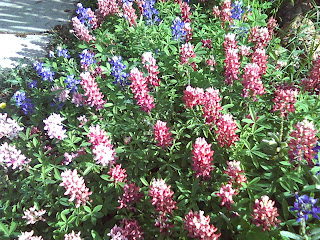 So anyway, my wife got called in to work early today and I had to pick the kids up from her workplace.  On the way home we attempted to find four different geocaches, and failed at all four.  However, upon getting home and checking the logs at geocaching.com, two of them have been stolen/tampered with for sure and I have suspicions about the other one.  The last one I think I can find if I have another go.  I had misunderstood the hint about it and now I think I know exactly where it is (more or less).  By the way, geocachers have a lot of special slang terms, and they have a verb for when a cache has been stolen by a non-geocacher (which is the noun form of the same word).  You can look it up if you want, but I'm never going to use it because it sounds so stupid.  I think for our next foray I'll hit a nearby park so we can take our time and snoop around without a bunch of (term that I'm never going to use because it sounds so stupid) watching us.

At the least I did get in some good practice on using my new GPS receiver.  If you want to see what kind of I got, click here.  It's not the fanciest model, but it's fun playing with.  I ordered it from geocaching.com, so it came pre-loaded with 100 caches nearest to my shipping location (my home address).  It has enough memory to hold a lot more than that--I think according to the manual it can hold 400 caches if you don't have anything else taking up memory (like waypoints, tracks, routes, etc.).  I also got a set of travel bugs, which is something geocachers use.  Whenever I get around to hiding my first cache, I'll use them.

This unit also has a trip odometer, which is something I was particularly interested in using.  I tried it out this morning on my meter routes.  By playing around with it for the last couple days, I figured out that I can suspend the trip odometer by simply turning the unit off.  I needed to be able to do this because I often have a full route in one place and then a partial route in another place.  I have also been really curious about how fast I walk.  By watching it as I was actually walking, I found that my standard pace is 3.5 mph.  A "brisk" walk for me reaches close to 4.5 mph.  I also did some sample jogging between meters a couple of times and found that my short-distance jogging speed is 7.5 mph.  So on today's routes I found that I walked a total of 6.76 miles.  I spent 2 hrs, 40 min moving and 44 min stopped (standing still).  It would have been quite a bit lower than that on the stopped time but my partial today was pretty dirty and I had to spend a lot of time cleaning off meters--my stopped time on the full route was only 22 min and I had to spend the same amount of time stopped on less than half as many meters on the partial.  The thing I was most curious about was my overall speed, which holds into account all the stopped time as well, and my overall speed was a mere 2.0 mph, even though I was moving at a pretty steady 3.5 mph between meters.

I'm going to keep doing this on all my routes so I can see how they measure up.  You see, I consider what I did today to be pretty much my easiest foot route.  I won't be surprised if some of the harder ones are close to 10 miles total distance.
Posted by AlanDP at 4:53 PM