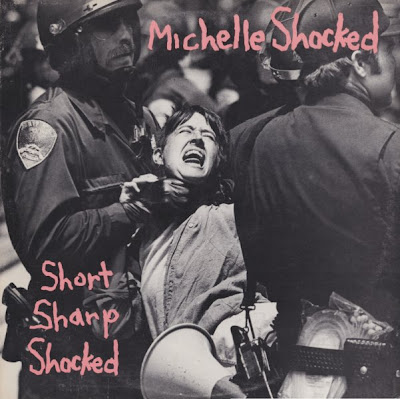 This is another one that I previously ripped from a duplicate tape. It was still in very good shape because I had played the record only twice, both times to record it to cassette, so this is only the third time the record has been played. Between those two cassettes, however, I've listened to this album many, many times.

That's an actual photo of her being strangled by a NYC (or was it an SF? I don't remember) cop who outweighed her by about 150 pounds during some protest or other back in her "skateboard punk rocker" days. You can read more about her bio online if you wish.

I first heard this album when I walked into Sundance Records in San Marcos one day (the old store on the square) and they were playing it in the store. It immediately struck as something I had to have, so I bought it that day and it has been one of my favorite albums ever since. This is the only one of hers that I bought on LP; the others I have are on CD. This was her first real studio album. There was one other before it, The Texas Campfire Tapes, which was recorded by a talent scout at the Kerrville Folk Life Festival and released totally as is (or as was), complete with crickets chirping and cars driving by in the background.

She isn't all that famous to the general public because her music is too country--and sometimes too folk--to played on rock stations but too rock to be played on country stations. This album is full of references to her childhood in east Texas. All the songs on it were written by her except for a cover of the country/folk standard "The L&N Don't Stop Here Anymore," which was written by Jean Ritchie and also covered by Johnny Cash.

Almost this whole album will go on my general favorites list. The modern CD release contains 2 discs, the first being the original album and the second bonus material.