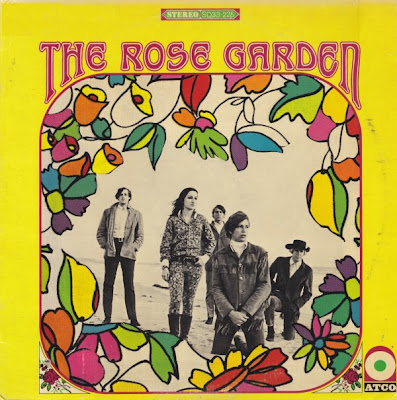 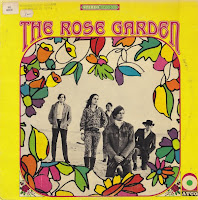 Above is the cleaned-up version of the record cover. If you care to see what mine actually looks like, click the small one to the right.

This is another old album that I picked up at Yesterday's Warehouse back in the 80s for a dollar; also another album that had previously belonged to the Schertz Public Library.

I was surprised to find out as much about this band as I did on the internet. I guess I'm used to not being able to find out anything about old bands like this. However, The Rose Garden did have one hit that reached #17 on the Billboard Hot 100 chart in 1968: "Next Plane to London."

They had that jangly folk/rock sound similar to The Byrds, with three-part vocal harmonies. The female singer, Diana Di Rose, sang lead on three tracks while one of the men sang lead on the other seven. There was one other male backup vocalist; when the lead singers weren't singing lead they also sang backup. One thing that's really worth pointing out here is Di Rose's throaty voice, which sat comfortably in the tenor range. That is, she had a very low voice compared to most women singers, and I like her voice a lot. In my opinion, the best songs on here are the ones she sang lead on. Only one song was written by members of the band; the rest were written by professional song writers who also wrote songs for many other bands & solo artists of the time. Also they covered one Bob Dylan song on this album (and back then, who didn't?). One other track which Di Rose sang lead on, "I'm Only Second," has a decidedly country theme to the lyrics, though not necessarily the music.

Below is a larger-res version of the back cover that should be big enough to read all the fine print. Click to enlarge. 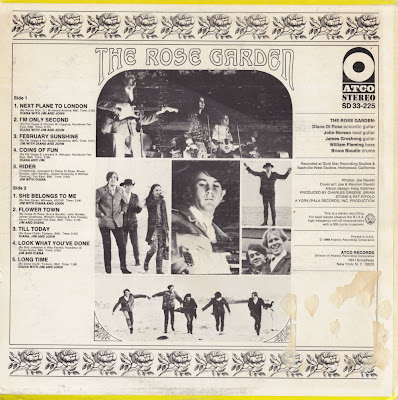 Wikipedia page is here. This album is available at Amazon.com as both a CD or an mp3 download. My record cleaned up much better than I expected it to and I got a pretty much perfect copy of it.

The three "reviews" of it at Amazon are glowing, 5-star ratings. I wouldn't rate it that high, but then I was only 4 years old when this came out and I wasn't listening to that stuff much at the time* so it doesn't hold a lot of nostalgia for me. But it is a good example of southern California folk/rock from a band that most people have probably not heard of.